The Problem with Milk - Plaskett College
Skip to content

The Problem with Milk

Home » The Problem with Milk

Besides humans, no other species drinks the milk of another species or drinks milk beyond their natural age of weaning. Cow's milk is meant for calves, human milk is meant for humans hence the adage "if it's not your mum, it's not your milk". Cow's milk does not suit the nutritional needs of humans and in this article, we discuss the problem with milk as a food and especially in relation to the detoxification process.

When looking at milk we find that there are many reasons why milk, especially Pasteurized milk, cheese and other milk products, whether from cow or any other animal, should be excluded from any diet designed with the idea of toxin elimination and promoting better health. ​

​1. Pasteurization destroys desirable enzymes in milk and leaves one undesirable enzyme, xanthine oxidase​, still active. ​It is thought to attach the arterial walls leaving them predisposed to plaque formation and atherosclerosis.

2. Pasteurization destroys desirable bacteria in the milk leaving those that have adverse effects.

3. Pasteurization renders milk even harder to digest than it naturally is.

5. Pasteurization destroys desirable antibodies, which naturally would give the milk at least some protection against being invaded by undesirable bacteria.

6. Numerous experiments with rats, cats and calves have shown that feeding these animals Pasteurized milk leads to “abject misery, physical degeneracy, and often death”.  This information comes from Dr Pottinger’s experiments with the diet of cats.

​Problems relating to milk in general.

1. High cholesterol and fat is a major risk factor for arterial disease and heart attacks.

3. Milk causes excessive and unhealthy mucus production in the intestines. This, together with the promotion of an alkaline bowel, resulting both from the inherent properties of milk and also from items (1), (2) ,(3) and (5) above, leads to poor absorption of minerals and vitamins from the intestine due to poor intestinal conditions.

4. Casein, the major protein in milk, is very hard to digest.

5. Hormones in cow's milk are cow hormones and can promote hormone imbalance and, among other effects, it is suggested, excessive growth in the young.

6. Milk is a very major factor indeed in the development of allergies and makes a vast contribution towards the causation of hyperallergic situations in which the subject becomes allergic to a very wide range of both food and nonfood items in his/her environment.

7. Lactose intolerance  from the inability to digest lactose or milk sugar, leads to digestive disturbances in a great many people.

8. Milk produces an extremely adverse effect upon cell sodium/potassium balance, by promoting sodium uptake into the cells, combined with potassium losses. This has extensive repercussions upon metabolism and upon cell minerals.

9. The sodium/potassium imbalance brings in its wake a major disturbance of calcium and magnesium balance. The very high calcium content and very poor magnesium content of milk and dairy products accentuates this effect.

10. Milk is mucus forming, not only in the intestines but also elsewhere in the body. It is often a major contributor to catarrh, sinus and hay fever problems and, generally, within the body it is prone to form congestion and blockages with excess and unhealthy mucus  for example  Fallopian tube blockages leading to sterility in women.

Anyone who could ever doubt the strength of the naturopathic case against milk would do well to read a book ​ by ​Robert Cohen (1988) called “Milk the Deadly Poison”. 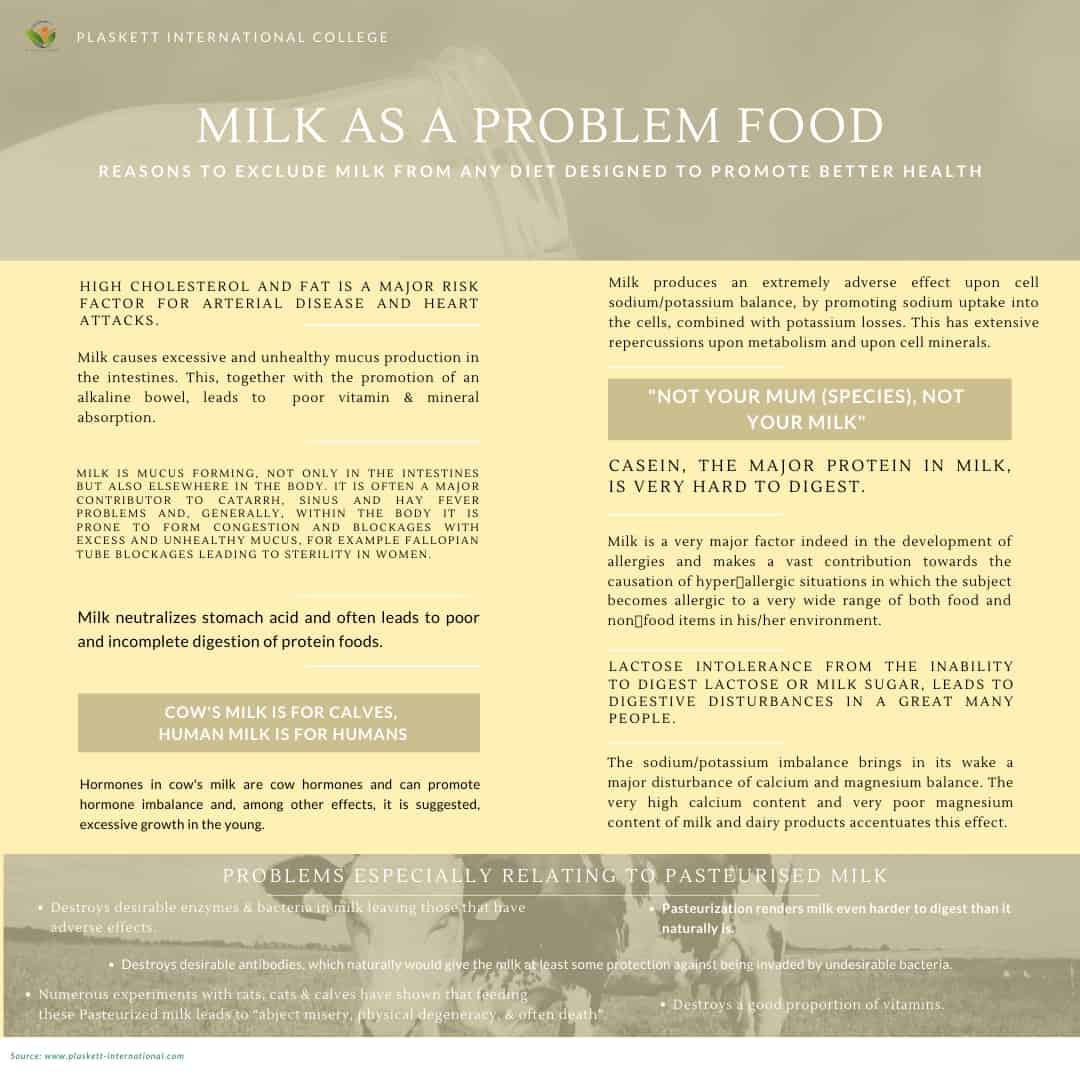